June Sky was started in the summer of 2012 so its members could explore their passion for rocketry. Yet the completion of our first water rockets will never be remembered as a pivotal point in its history. The HATs program on the other hand, most certainly will. When the group seemed lost, in the aftermath of an overwhelmingly impossible H202 rocket project, it was the hope of a successful weather balloon that kept us working. And successful they were. The HATs program was the first time that June Sky proved it could be successful scientifically, we were more than just talk and could actually collect data. What follows is the story of how, and why this amazing program came to pass.

You could say that all this success began with failure. It was the Fall of 2012, and we had completely and absolutely failed in our attempts to construct and launch a H202 rocket. We had already gone over budget, and the fuel hadn’t even purchased yet. The rocket that we had labored so diligently on for the past six months was beginning to look more and like a pile of haphazardly arranged scraps. It looked like the group was going to start dissolving right then and there, but then Hunter had an idea. Following in the footsteps of many before us, we would send a helium weather balloon to the edge of space. Unlike those before us however, we would capture it all with an HD camera, and easily recover both the camera footage and the camera itself. Within days, a Kickstarter would be launched. This time however, the world would not be on our side, and we fell short, overwhelmingly so.

The project would continue, albeit at a much slower pace. We had to pay for everything out of our own pockets, and thus construction only just finished in time for the first anniversary of our June founding. By the June the 21st we were 100% ready to go with a capsule that would not have looked out of place at a 4th of July picnic. It would be known as the Vega 1.

The very next day after completion we drove down to a cornfield in the middle of nowhere: Wilmington Illinois. Due to FAA complications and us having to fill up a second balloon, we launched at 4 PM Central Time, Recovering around 8 PM 40 miles northeast of launch site. Read the full story here.

The balloon was a success, but it wasn’t perfect. The cameras had malfunctioned, as had the Arduino, and we got next to no data. Angry at the bone that fate had thrown us, we upgraded the capsule heavily, cutting off nearly 5 pounds of weight, and replacing the previous cameras with a GoPro Hero 3. By the start of July we were ready to launch the Gemini 1, and this time, things went much more smoothly. We launched and recovered the balloon in just under 3 hours, an impressive feat. Video footage was also stellar, although we didn’t get as high as we wanted to. Read the full story on our Facebook page.

Not satisfied with anything but perfection, we repacked the Gemini with more instruments, adding a GPS chip and an additional Hero 3 to what would be called the Gemini 2. A week into school, we would head down to Wilmington for the final time, to launch what was the last HAT of the summer. Apart from a long flight time, everything went swimmingly. We received wonderful data and footage, and nothing was damaged or broken except for the Plexiglas of the Capsule itself. You can read about it in Rohan’s post.

The Importance of HATs

If you had seen two June Skies, one from November 2012 before any HAT had even been thought of, and one from October of this year, the two groups would look nothing alike. Last year, the team was down in the dumps, rarely, if ever able to get anything done. This year, there is always someone doing something, someone ready, and excited to be working on a June Sky project. Last year, new and exciting ideas were the exception, this year they are the rule. Last year, our company was structured in a similar manner to the feudalistic corporate ladders of america, this year, it’s closer too that of the freethinking Silicon Valley design company Ideo. What happened? HATs happened! We had jumped in too deep with the H202 rocket, but HATs proved to us that we could still swim. Six months of experimentation had also proved the benefits of unrestricted creativity, and out went all of our positions and assignment schedules. In short, HATs allowed us to cast of the cocoon of business trappings we had entangled ourselves with, allowing us to return to being, first and foremost, scientists.

Yet now that HATs are over, where do we go from here? The group has come forth with a number of options, but common consensus is that, for the sake of our own pride, and the legitimacy of the organization, some kind of rocket needs to be launched within the year. A mixture between sugar (the fuel) and Pottasium Nitrate (the oxidizer)) is our fuel of choice. Testing has yielded excellent results, although the burn rate is not quite ideal. An Inventor .ipt model has also been completed, and we are currently looking into places to print and CNC cut many of the parts.

And after the rocket? It could be anything from remote controlled solar planes to robots.The sky is quite literally the limit, and only time will tell what could come to pass. All I will say is that when the wolves are silent, it is the moon that howls, calling, calling for us to return. 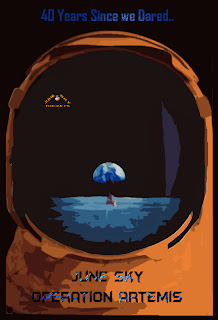